How to ensure your house electrical system is properly protected.

Having good grounding for all your electrical panels will protect the electronics in your house and might even save your life.  When surge protectors trigger they need to be able to dump excess energy into the ground and you need to get rid of that energy or else the surge protector will not help you.

Rather than just using the two building code specified 6 foot separated metal stakes in the ground it is worth going above a beyond.  Using 10 copper clad 8 foot long 5/8" diameter stakes driven into earth (not stones) that rain water will flow to will provide a much better ground.  Put the first two stakes close to the panel with about an 8 foot spacing because this will ensure you meet building code.  In my case I have two subpanels so I need two stakes for each panel to meet building code.  Put the other 8 stakes in an earth swale (shallow ditch to channel ground water flow).  Use 6" of gravel in the swale to help water collect.  Put the stakes about 10 feet apart and bang them in so that the tops are 6" below the surface (the 6" will be covered by gravel).  Connect all the stakes using thick stranded copper wire of at least #4 diameter.  Use good quality ground clamps (UL approved for burial) to daisy-chain attach the wire to the stakes. 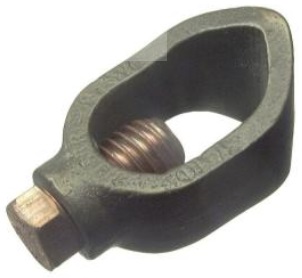 Keep the wire a continuous piece rather than having any joins.  It is best to wrap the wire round the stake and put the clamp over the wrapped wire.  Burry the wire between stakes 6" below the surface.  If you have a Well then layout the stakes in the direction of the Well and continue the wire on past the stakes to the Well metal casing.  This will need something like a total of 150 feet of earth wire because there is a building exclusion area of 100 feet radius around any Well.  The metal casing of a Well is a very good earth so it is highly beneficial to connect it into your grounding system.  I route the earth wire along the south edge of the driveway in a small swale.  In the ditch there are 6 stakes (in addition to the two on the west of the house and the four north of the north house wall just behind the electric panels).

Inside your house you should run a ground wire back to the panel ground for anything large that is metal, eg duct work, garage door runners, etc.  To avoid having to run too many ground wires it is best to avoid metal conduit, metal pipes, and metal electrical boxes.  Using plastic is a much better choice.

It is highly recommended that you install a whole house power surge arrestor in your main panel and in any sub-panel that feeds electronic equipment.

In a sub-panel, I think it is best use a surge protector that dumps the spike into the earth rather than the neutral.  This avoids the spike having to go all the way back to the main panel before getting to earth.

You want a unit that mounts so that you can see the LED indicators.  This means you want it mounted on the outside of the electrical panel.

If the product has an earth wire and a neutral wire, you need to make sure the two are not connected because it a sub-panel they must not be connected. 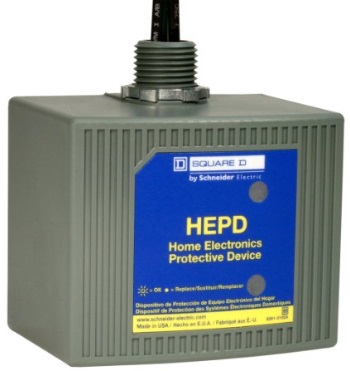 It is useful to also have a whole house surge protector in each subpanel.